Some interesting facts about traditional coconut plucking in Goa 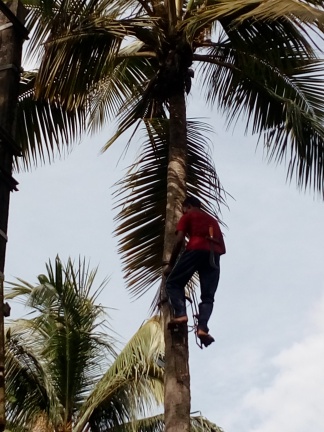 Some interesting facts about traditional coconut plucking in Goa

Having a few coconut trees around our office area, we have to regularly organize someone to pluck the coconuts and cut the falling palms in order to avoid any accidents. We were lucky to have one of our clients, Deejay Farms (deejayfarm.com)  assist us in this task.

This recent experience got me interested in knowing more about Coconut plucking – one of the oldest traditional occupations of Goans.

Coconut climbers/pluckers ‘padekars’ carry out the harvesting of tender and ripe coconuts from a plantation or residential areas.

Traditionally, padekars were paid half in cash, half in coconuts. Nowadays, they charge a reasonable wage per tree (depending on the number of trees). It’s a dying skill and very few padekars are to found. Most of them are the older set, you can rarely find a young one!

Skills in traditional methods were usually passed down from one generation to another. Here the padekar uses a rope harness ‘khaddum’ wrapped around his feet as a climbing support and a machete ‘koito’ to cut notches in the tree bark which enable him to climb higher. On reaching the top, they support themselves on the base of the palm frond, sometimes even standing on them! He can then easily cut down mature or tender coconut bunches and loose palms. Plucking of coconuts was done four times a year, and the record of each plucking was kept by making incisions (katre) on the trunk with a koito.

A few years back, a coconut climbing machine was developed by M. J. Joseph (Appachan) in Kerala. This makes it safer and easier to climb coconut trees. The machine consists of two metal loops for holding the feet with a handle at the top for hand grip and a pedal base at the bottom. The loops are put around the tree trunk on opposite sides. The loop is lifted up by the simultaneous movement of the hand and feet, propelling the climber up the tree. A safety rope, like that used by rock climbers, keeps the climber safe from the risk of falling.

So when you next come across someone plucking coconuts, stop a while and look with amazement at their skill. It’s truly a sight that will not be forgotten.