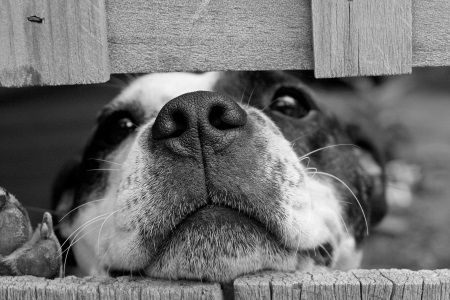 One day, my sister and I were playing badminton outside our house, when a stray dog came towards us wagging its tail. We petted the dog and gave it food….And that was it, he was ours. We named him Nemo.
Nemo is a very peaceful dog … that‘s just a nice way of saying that he never barks … at anybody. My friends always tease me asking me to “teach him to bark”.
Nemo is also afraid of water. Once we tried to give him a bath and he ran away and hid somewhere. He returned the next day looking dirtier than he already was the previous day. He comes and sits in our garage during the rainy season, to avoid the rains. Sometimes he even brings some of his friends to let them sit in the garage.
When my mother goes for walks in the evening, Nemo follows her wherever she goes, padding at her heels. Sometimes he doesn’t let her walk until she pets him.
My mother prepares chapattis for Nemo every day. She just has to stand near the gate and call out to him, and he comes running to her. Nemo does not eat anything fed to him until we pet him first.
Nemo sits at our gate most of the time, guarding it as its own house. Even if Nemo does not bite or bark, people are terrified of him. They often ask us to hold him off till they pass through.
Nemo was not bought or purchased, we just found him at our door-step. And he has become ours. We love him and he loves us back. Sometimes I wish people were as loving as dogs.