Flutter is a cross-platform, open-source app development kit specifically for mobiles on which Google has been working on for the last few years with a number of developers within and outside the Company. This platform is based on C/C++ but most of it is based on Dart.

Flutter is an entire widget based UI. Most of its UI is created using pre-defined components called widgets. It doesn’t end here. Flutter also has its own engine to render on Android and iOS platform. These components are based on the latest Material design.

The app is built using Flutter’s inbuilt UI components called widgets. The right widgets along with the right properties to make a beautiful UI.

The widgets can also be nested inside other components and can use the same properties from its parent component. In Flutter, there are only a few files created as the layout and functionality is defined in the same file called Dart.

A  few screenshots of the materialistic UI

Dart is a programming language used to develop mobile, web and server apps. It can also be used for the latest IoT devices as well. This language was initially developed by Google.

The language Dart has been influenced by many languages, mainly Java. A Java programmer will easily notice the similarities between the two languages. Dart supports abstraction, encapsulation, polymorphism and inheritance as it is an object-oriented programming language. Even though Flutter is written in Dart, it develops apps by borrowing the best features of React.

Well, let’s talk about the Pros:

And here are some of the Cons:

Have you used Flutter? let us know your feedback in the comments below! For anyone who hasn’t tried it, its a great tool to explore android app development. 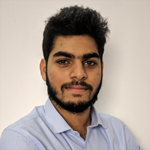